Monday I was supposed to have a dressage lesson. First one in a month and I was so excited. Florida had other plans though. We got through 2 of 4 lessons and then the skies opened up with lots of thunder. We're all willing to brave the rain, but the thunder and lightning was a big no. Le sigh. Dressage trainer is harder and harder to schedule with these days. I didn't realize it, but he was so easy to schedule with in the fall because he wasn't travelling because of the pandemic. Now... ugh. I'm bugging him like crazy to let me know dates he could make work during the next month. We managed to have a decent ride in the evening ourselves though.
Yesterday I dropped all of the novice sized jumps to poles on the ground by them and we worked on cantering poles. We did a tiny cross rail too, I was hoping to just hop it once or twice, but he rushed through it twice, so I got off, added a 9' placing pole before and after, and then tried again. The first time he about stopped at the cross rail because he was staring at the pole on the ground after, but it definitely had the desired effect. No rushing and no pulling to prevent rushing.
Today I rode him in Mr. GY's TBs Mullen Mouth loose ring. He suggested I try it after watching the dressage test I recorded last week. I half expected him to lean on my hands more in it. Given my rudimentary understanding of bits, having a solid piece would mean more leaning. It was the exact opposite though. He was pretty light overall and felt more consistent and happy in the contact. I'm going to ride in it a few more times, but I was pretty impressed with the feeling he was giving me. He has been in a french link eggbutt snaffle since I got him, and I would not have thought to change his bit without the suggestion. I was chalking any inconsistency and heaviness up to greenness and my incorrect riding. Which is not to say that's not a huge part of it, but this may be another tool we can use to help. 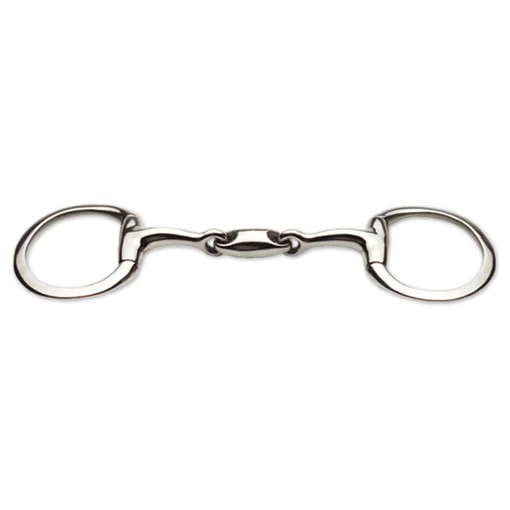 Leila went in the same bit. I never was happy with her feel of the contact. She went just as well in a sidepull hackamore as she did in the bit. Zing went in a full cheek single jointed snaffle for jumping and a KK loose ring french link for dressage. I played around the most with his bits for jumping. Dressage trainer set us up with the KK loose ring for dressage after I was a working student for him and Zing was always so consistent and soft in the contact I never messed with it. Jumping we tried a few different things - single jointed, double jointed, snaffle and elevator. In the end, if I didn't ride properly he'd run through whatever bit we used, so we settled on the single jointed full cheek.
I really don't know what I am doing when it comes to picking a bit for a horse - I have seen people have bit fitters come out to assess, and maybe I will eventually go that route. In the mean time, the GYs have roughly 30 bits I can work my way through to see if one is better than another!
What bit does your horse go in? What thought process went into picking and then assessing the effects of different bits? Do you have a go to bit that you start horses out with?
at June 16, 2021