I lucked out Wednesday and managed to get Ben to a local schooling show at Clayton Frederick's farm. There are so so many different options available this winter. It's really nice to be able to check out different farms and courses. I was feeling anxious about stadium. With Ben starting January with a week off and with our stadium round at the December POP show, to put it bluntly, being pretty shitty, I wanted to get a couple more rounds done before the Rocking Horse event next weekend.
Ben started super goofy. He'd gotten to play with the other horses in the morning and was very upset about being taken away from his new BEST FRIIIIEEENDS. He was screaming as I got out to open and close the property gate, and I'm pretty sure he worried the whole drive there. To his credit though he's a professional and even though I couldn't leave him alone on the trailer while I went to look at the course, he was totally fine once I was on him. He spooked a tiny bit at the mirrors in the warm up area, but I don't blame him. There were shards of mirror left stuck to a concrete wall, not really normal.
Our first round wasn't the greatest, I could NOT see a distance to save my life.
He was absolutely perfect though, two strides in the two stride, no spooking, just a complete professional.
We went back in and went around again and it was lovely. I missed to the in of the two stride but he stepped up and it jumped out nicely. With these rounds under our belt/girth, I realized driving home that it feels like we are a training level pair. Unlike our first few rounds at 1m and even our move back up to 1m, it doesn't feel scrappy anymore. As seen above I still screw things up ALL THE TIME. But it doesn't feel like we're going to die/crash the jump/stop. It feels solid and good. I still reserve the right to screw up badly enough to die/crash the jump/stop at any point, but I'm no longer internally screaming about that possibility before each round.
Ben knows his job and while he reserves the right to spook at things that might eat us, he now does his whole hearted best to get us to the other side of the jump. If we turn and a jump enters his field of view, he locks on to it now and doesn't go "Really?!?! That one??" while internally screaming, he goes "That one!" And goes for it. And he doesn't let mistakes I make, like missing to an oxer, shake his confidence.
I certainly still screw up plenty, but we can shrug, say oops, and move on without panic. It is a really awesome feeling, and I'm savoring every bit of it. 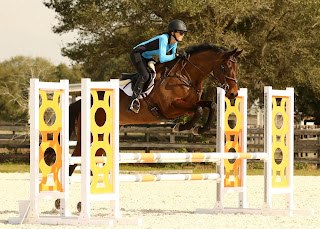