Ms. GY and I went out for a fun cross country schooling on Friday. My main goal was more water exposure. He is so strange, he definitely doesn't mind water (went to the beach with his old owner... walks through puddles on a loose rein with no wiggling...), but water complexes make him really, really nervous. He'll stand close to the edge snorting and I can feel his heart racing. It's like he doesn't realize it's water until another horse goes into it first. Then he is super happy to follow them in and will splash and drink. He'll also trot and canter through with very little hesitation after the initial wetting of the feet.
Well, we definitely accomplished that goal! He hesitated and it took a few times of stepping forward, pausing, snorting, trying to step sideways, repeat, but then he went into the water all on his own without a lead horse!!! 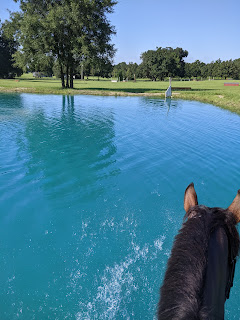 He also did up and down banks with much more grace than when we schooled way back in February. Partly aided by his new ability to bend his body and lift his withers, partly aided by the fact that we could do one up bank and weren't obligated to then go up another. Gave him more time to process his feet and get all 4 of them in order.
He continued on to do ditches really well too. I heard JT in my head - hands forward, loose rein, relaxed trot. He was surprised by it the first time and stopped but then walked over it. After that he was all business and did the larger ditches without a problem too.
The jumps... were a mixed bag. He didn't stop or even think about stopping at anything. But he did flail/roll over his shoulder to about a quarter of them. Mostly if I rode him right he jumped properly. But if I slacked and just aimed? Yeah, not pretty. His willingness means that if I can just educate him that pointing at a jump not only means get to the other side it means lift your shoulders and knees up while you do it, hopefully that will be the new status quo.
As we let them cool off after hosing, we ended up chatting with a mom and daughter who were waiting for their horse to show up with their trainer. They were relatively new to horses and eventing in general. It was neat to answer questions about Yosh and our journey together. As I loaded him up I felt a little bit closer to him. It's something I don't think I've really talked about, but I have been fairly guarded about really loving this horse. I have been working with him with as much fairness and kindness as I have with any horse. However, the feeling is similar to the feeling I've had when it has been someone else's horse. Over the years I've had a few horses in and out of my life for a month or 6 months or sometimes even longer. But I've always known they were someone else's horse and ultimately how long I got to keep working with them, where they went, and what they did was someone else's decision. I've certainly been attached to some of these horses, but with a different feel than with Zing and Leila.
Zinger was perfect and my best friend for 15 years. I loved that horse with every part of my being and he loved me too. I was his person, which he made clear pretty early on. He'd pick me out of a crowd of people walking and keep his eyes fixed on me. He'd make angry faces over the fence if I rode another horse. We knew each other inside and out. To this day I actually expect Yoshi to spook at the same things Zing would've - farm animals - and am surprised when he doesn't and instead spooks at other things. He is the standard to which every other horse is measured.
I wasn't actually looking for a horse when I found Leila, I didn't think my heart was ready for that just a year after Zing died. But she was the sweetest, cuddliest horse I have ever met. She very easily wormed her way into my heart by being like a giant teddy bear. You could bring anyone around her and she would immediately engage with them, but in a way that didn't intimidate non-horse people. She made it so easy to adore her and love on her and spend hours just hanging out with her on the ground. Even before her accident it became clear she might not be able to do much beyond BN level, but she was SO honest and willing I figured I could always lease her out to teach kids at entry and BN. Then that all shattered in a fairly spectacular fashion. My heart broke for such a sweet, kind, trusting horse to have to go through what she did. I gave her the best gift I could when I helped her pass peacefully rather than living a life of pain and discomfort. She was never a horse that would have acted out in pain or said no when she was hurting.
Yosh? Well. Buying him followed closely on the footsteps of euthanizing Leila and then our relationship started out with 2.5 months of uncertainty about his soundness and future as a riding horse. I wasn't exactly diving in heart first to loving him as my forever riding partner. And honestly, it seems like he's been similarly guarded. Chatting with the teenager and her mom about him though after being out cantering around a cross country field though, I felt a new connection to him. I allowed myself to appreciate just how freaking COOL he is. He left his buddy from home just fine to go jump new jumps in a new setting. He jumped three different ditches without a lead and went into water on his own. He went up and down banks with barely more than a second hesitation the first time down. Everything I've asked of him, he's said "Well, yeah, I could try that." And who could ask for more than that? Riding soundness in horses is always a crapshoot, but I might as well live in the moment and appreciate what we have right now.
at September 07, 2021