The schooling show at Rocking Horse was also my first time camping in my horse trailer. I bought the trailer in June of 2020. I actually bought it before we bought the truck to haul it with. I'd been scouring Facebook for two horse trailers. I hadn't done a lot of thinking on brand or bumper pull vs gooseneck. I wanted a straight load with a tack room and no mangers, but hadn't planned a lot beyond that. I had also driven to 1.5 hours for a really under priced slant load trailer only to find out it had sold that morning but the seller hadn't bothered to let me know. To be fair on that one, given how low the price was she probably had a million FB messages to sort through and just forgot that we actually had a time lined up.
When I spotted the ad for the trailer we ended up buying, I wasted no time. It was a 2013 Merhow Equistar XL 2 horse gooseneck with tack room for a great price. The ad specified that the person was posting for a friend who didn't have Facebook and gave a cell number to call. As soon as was appropriate for a weekend morning, I called the number and left a voicemail. There were 10+ comments on the post asking questions, but when the seller called me back she said I was the first person who had called. Hooray for overcoming whatever that feeling is that says "write text on phone, calling people is awkward". My husband and I drove 30 minutes to her house to check it out. She'd only used the trailer 5-6 times to haul her horses and some furniture down from New England. It had some surface rust on the frame but was otherwise in pristine condition. She asked if I wanted to bring a check later that week, but I told her I'd bring cash the next day, scarred by my earlier experience. I arranged to have a friend with a truck come with and we picked the trailer up the next morning. It then sat for a month until we actually bought the truck to haul it and got the gooseneck hitch installed. 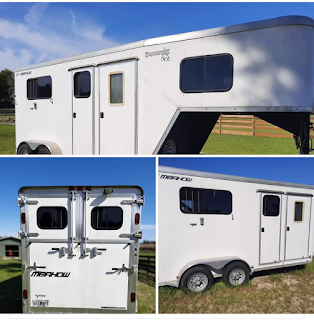 I LOVE this trailer. It absolutely dwarfed Leila, she probably could have stuck her head straight up and never connected with the roof, but I'd much rather have extra space. Yoshi fits great in it and every horse I've tried to put on it, including a notoriously difficult loader at my old barn, has walked right on. When you open the escape doors it is so light and inviting they seem to not mind at all.
One of the perks of the gooseneck was the ability to camp in it. It certainly was not a factor in buying it because I am spoiled and live within an hour of... 5+ venues that hold multiple schooling events throughout the year and don't need to camp much. I also have done a lot of tent camping and therefore have all the gear so I could easily pull that out for a show if need be. However, the POURING rain that turned into a most of the night drizzle/drip at Rocking Horse was MUCH nicer in the trailer than it would have been in the tent. It's all well and good staying dry from the top in a tent, but when sheets of water start running around on the ground... yeah, been there, done that, getting soaked from underneath when water works its way between the tent and footprint... no fun at all.
I opted not to bring cooking gear for this outing because my husband was not coming with me. I don't mind eating cold mac and cheese or sandwiches for lunch x 2 and dinner, but he starts to object to that around sandwich number 2. He also is more than willing to plan out the menu and pack the gear though. I packed the cooler with 3 frozen drinks - two water bottles and one gatorade. I added the mac and cheese I'd cooked, a bag of carrots, cold brew coffee in a jar, and a bag of chocolates and then filled the rest of the cooler with ice packs. For breakfast/snacks I got a box of granola bars. Once I arrived I moved most of the things from the truck into the horse compartment of the trailer. I try to keep the truck as clean as possible and after the recent battery experience, the less I go in/out of it and turn on the lights, the better in my mind. I set up my bed in the gooseneck with plenty of space on either side. I went for the middle-ish area. I cleaned off the hay from the fan from the horse compartment and moved that in to sit between the two windows over the gooseneck.
The fan is one of my favorite parts of the whole set up - it is a Ryobi Air Cannon. All of my husband's tools are Ryobi, so we have at least 4 batteries. On the highest setting, one battery lasts 1.5-2 hours, which is about as long as my longest trips in the trailer are. I anchor the fan to the front snaps in the horse compartment with a cord, but I also put a short 4x4 on the base of it, and that makes it sturdy enough that I've never seen evidence of it moving around while driving. I used it on the lowest setting overnight, I was plenty cool and only had to replace the battery once in the middle of the night.

With the camping pads, I could still fully sit up in the gooseneck. I think a thin air mattress would be fine too, but we have an aerobed that someone gifted us, and that definitely would be too tall for going in there. I keep a floor mat just inside the door to the tack room because it is currently carpeted, and this trip I was obsessive with taking my boots off every time I stepped in so that I would eventually track less dirt/water up into my bed on the gooseneck.
I actually slept really, really well there. It helped that I was pretty tired and the fan was good white noise, but it was also a nice comfy set up.  I kept our Friday gear (sweaty saddle pad, boots, and my disgustingly sweaty breeches) draped over the tail gate of the truck to keep from stinking up the tack room. If I were trying to do show and camp with two people, I might bring a folding saddle rack, or two if I could get my hands on them, to set up more tack in the horse compartment and minimize the horse gear in the tack room. There are only two saddle racks in the tack room, which is fine as a single person trailer, but does require a lot of stacking things when there are two people with two saddles.
When I broke things down, everything going back to the house went back into the truck with sweaty things in the bed and non-sweaty camping gear in the cab. Everything going to the barn stayed in the trailer since the trailer lives out at the barn. This made arriving back home pretty easy - I saved unloading the tack room for the next day but took care of all of the sweaty, gross things that day.
My essentials:
- Fan
- Floor mat for trailer
- Head lamp and solar power lantern. Seriously, head lamps are the best thing ever. I keep one in my horse first aid kit for looking at eyes or other things. Plus you never know when you'll unexpectedly end up out later than you mean to. And if you like spiders, it's pretty amusing to find them in the grass at night from the reflection from their eyes.
- Cooler containing cold brew coffee (I do this in a cheap way at home myself and make mason jars of it, so it was easy to toss one in)
If my husband joins me at any point we'll probably toss in the camp stove, stuff to make fresh coffee, and stuff to make a better dinner, but not bringing the stove and cooking kept things simple and meant I didn't have dishes to wash on top of cleaning up all the horse things.
at September 27, 2021