JT came out to my barn yesterday to teach Mr and Ms GY and me. They both had great lessons with her and are excited to ride with her more. I got the perk of two lessons in one week and only one trailer trip. Monday we flatted at her place. He was really, really good. Coming through and softening quickly and giving us some really lovely canter work "collecting" and "extending" (can't wait for the day those aren't in quotes anymore). She had me keeping my hands together, thumbs almost touching, at points during the canter to help with my left elbow that doesn't want to move much and my right hand that wants to pull. 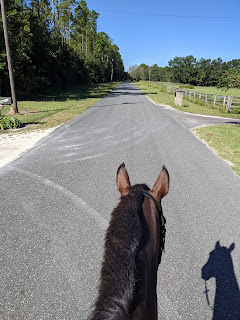 Our jump lesson yesterday was... messy again. We started out over the crossrail, back and forth like always, and he was wanting to pull and run in the direction towards the barn. I was pulling back and not softening before and over the fence, so he wasn't softening either. Once we got that sorted out we moved on to a little course and again he was being very quick back towards the barn. She had us solve this in stages - first setting a crossrail bounce headed towards the barn, then having me halt straight after. She doesn't drill things, so we halted once and the next time he was nice and polite so she had me go on. We hooked a left hand turn to a one stride. We kept missing the striding to the in and he semi-crashed it once. She explained that right now he can soften and jump athletically from the right spot and from the gappy spot, but he isn't yet there for the tight spot. So we did it a few more times, each time with a 90 degree turn right to a lattice with a barrel in the center of it after. He's never seen that jump before and my steering sucked so we were definitely angling it because I was turning late, but he never even thought about stopping or ducking out. Good boy. He is so freaking honest. After the lattice we turned left and headed back down the bounce to a 180 to a natural. That was a lesson in looking at the jump immediately after landing. When I did the turn was pretty easy because we were jumping in the giant field, so there was really all the time in the world, but when I didn't it really snuck up on me and was a pretty sharp turn the way I rode it.
I really struggled with the long approach to an oxer we added in a different course. I've heard enough people talk about this I don't think I'm alone, but each time I thought I saw the distance but was wrong. It was weird because I have been at least seeing the distances really well even if I'm not getting us there at the right one. The other jumps this was still the case, I could tell we were going to get there tight but couldn't/didn't do a damn thing about it. Practice makes perfect though, so on we go. Mr GY has been gone for 2.5 months and he hadn't seen Yoshi go since he came back earlier this week. He was really impressed with the progress we'd made, so that was encouraging during a period where I'm feeling like I'm not riding well. 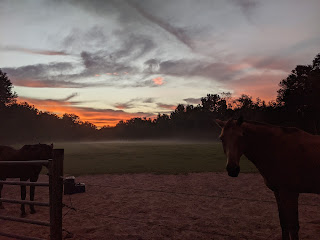