Our dressage this time was a bit worse, he was kind of spooky about the letters, the rails, and the tent. I'm learning that when he gets spooky or overwhelmed he doesn't get quick, he just gets a little sticky and a little behind my leg. It's not what I'm used to as far as spooking, but I guess as always, the solution is more leg (even for the ones that get quick). And also more time in the ring will make him less spooky about the sights there.
He was also interested in the horse doing a test in the ring right next to him - especially during the free walk. Ms. GY has trained all of her horses to basically put their nose on the ground when she widens her hands and loosens the reins at the walk, I need to get her to show me how she does that! We also picked up the wrong lead and because the canter is all of 3/4 of a circle in intro C, that was basically it for that movement and the score for transitions. It was a bit disappointing after a stellar warm-up with JT, but this is his third show ever and our second one together, so I can't be too upset. We ended up with a fair 36.1.
Jumping he was absolutely perfect! The warm up was chaotic, including two people who would not get off the freaking rail to go left-shoulder to left-shoulder and were cantering rapidly around. I was tense, he was tense, he was doing a few little hops here and there when other horses got close, so we hopped the cross rail twice then oxer three times and then went in. He was SUCH A GOOD BOY for the whole course. He was very looky-loo as we went into the ring, there is a lot to see and the fillers are pretty exciting there. But once he saw the first jump he was all business. Just a little close of my leg and he stepped up to it. We got to 2 a little awkward and then I was pulling for the right hand turn 3 to 4, so he stumbled there, but other than that it was pretty smooth. He even threw in a flying change for me! Not something we've schooled, but something that he will do if we're out cantering in the hay field.
Cross Country was AWESOME!! It was so much fun, and he felt good the whole time. We did "two waters for the price of one" because I was a bit worried about him stopping, so we trotted through the unmarked water crossing and then looped back to trot through the flagged one. He did both just fine, so it just amounted to more schooling. He did awkwardly canter stride over a telephone pole sized log, but he just didn't feel like it was a real jump worthy of any effort. My friend rode along with the chaser so actually videoed the whole thing! I cut it down a little, but I could just watch him canter along between jumps all day long. He's so smooth and flowing out there, I love it.
I know I just gushed on and on about him in my schooling post, but he is getting so good at his job, it is so cool to feel. He's locking on to the jumps and even when he is unsure about brightly colored fillers, standards, etc if I close my leg, he instantly goes "Yep, okay, got it" and gets it done. He also stood tied to the trailer all day with his fan and water and gave zero shits about anything going on around him.
We moved up from our 3rd after dressage to end up 1st! 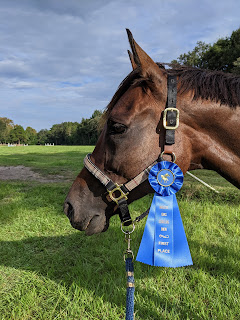