Both to keep my mind occupied and because we're entered in our first N at the start of April at Rocking Horse, we're doing a decent number of lessons in the next two weeks.
We went XC schooling at Majestic the day after I brought Yoshi to his new home. JT was riding a client's horse she is competing this weekend. Since she was riding and coaching, there is no video. So please excuse this rehash session with still photos from the schooling show.
LH just gets better and better every time out. He was pretty much all business as we schooled the novice course. We warmed up with a trot and canter over the entire property and then started over a couple of logs that he and the horse JT was riding were finding pretty spooky. They were by the training level cut out coop that is painted black and white. He spooked pretty hard at that coop while doing the thing with the logs, but he still did the thing appropriately well.
We moved on to the cut out tables next. The horse she was schooling was finding new and creative ways to jump the BN table each time. Not making good choices necessarily... So once he remembered he was a 4 legged creature, not a 2 legged creature, we headed up the N table and did the coffin and then came around to do the N cabin.
It was a busy Sunday so when we saw the water looking fairly empty we headed down there. Unfortunately we weren't the only group that spied the opening, so we kept it quick. LH does not seem to have a problem with water at all and happily did the N line of a log stack, canter into the water and then jump up the bank for the out. We added our corner friend again in the mix, a bit of a drift left lead to jumping the widest part, but y'know. And then we hopped tidily over a log on a table before going back into the water and jumping the training roll top 2 strides out from the edge.
We vacated the water and then headed over to the start of the course to pick up the N coop. I mistakenly jumped the BN the first time, the dang novice one looked large. LH picked up on my hesitation and tried to slide left. I corrected, but we ended up with a pretty crooked jump. From there it was a nice gallop to the trakheners. Really those are more about spooking the rider as far as I've seen and they're not that tall, so it was NBD. 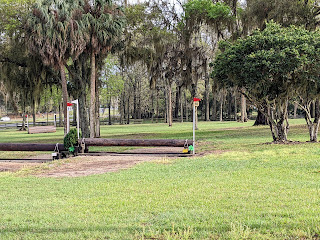 We then did the up and down bank lines and headed from there over to the tires. They are in a line of BN - bush - N - bush - T LH was spooking at the tires and I didn't correct things fast enough. I ended up tapping him behind my left leg which lead to a slide to the right. This put him squarely in front of the T tires rather than the N tires and at that point he had decided I was serious, so hopped right over the ones in front of him. Probably not the way he had planned to execute that one!! We circled back around and did the N one appropriately.
We headed back to the water so JT could hop the boat house one more time. This put us near the T cut out coop he had spooked at so much and I asked her if she thought we could do that. She told me to keep him straight and mean it, and I did and he pinged right over it, acting like he'd never even spooked at it earlier. Good boy!
Monday was a dressage lesson. We spent some time walking and playing with a walk that kept his SI moving and flexing by letting him stretch a little bit down and then picking the reins back up but keeping the swing and relaxation. I still struggle with picking the reins up short enough the first time, but maintaining the relaxation; definitely a work in progress. After the swingy walk warm up, when we picked up the trot LH was right there and ready to WORK. He felt amazing: soft, supple, forward. I was able to stretch up and rebalance him. Our leg yields were right there as well. JT corrected my right shoulder rotating forward (while simultaneously pulling back with my right hand... talent...) on the leg yield left (off the right leg) and then he flowed right over with good crossing of the leg under and moving his barrel. The leg yield right (off the left leg) was great from the get go (imagine that, I ride him straight he moves straight!).
Canter we worked on correcting any rushing and flatness and replacing it with straightness and lift UP. We struggled some to the left, I was having trouble maintaining the canter rhythm with my seat and so the half halts were leading to trot. NBD, we would just half halt at the trot and then pick up the canter again. Once we got it on the circle, we carried it on down the long sides, throwing in a 15m circle if we got a little flat. We took a walk break and then picked up the right lead. And OMG, he was right there. Just fantastic from the get go. I had to struggle a bit with straightness on the long sides, my body was pushing his haunches in, but once I got my hips straight he felt fantastic. So we called it a day and quit on that. Such a fantastic ride.
He was adorable after, we were standing and talking and he kept craning his head around to stare at my foot basically. I was worried he was bothered by something, but his eye was really soft. Then I remembered I hadn't fed him all the treats in my pocket before the ride... I gave him one and he was quite happy and then thought he'd found a magic treat button and kept craning his head around to stare at me. Adorable pony!
at March 22, 2022