The track of Ian shifting further south left us up here basically untouched. It was about 12 hours of some gusty winds and not much rain. I feel for Fort Meyers and Sanibel and Captiva Island. My husband and I go to Sanibel nearly every year for a few days. Seeing the pictures of the destruction there is so sad.

Ms. GY and I were supposed to go to a lesson this morning. I almost forgot to set my alarm last night and then was moving super slowly this morning. But when I pulled up (late) 15 minutes before we were scheduled to leave, ponies were still out and hadn't had breakfast. I was surprised because I'm usually the slow moving, running behind part of our duo. Usually I show up and all the gear is loaded, horses are done eating, etc etc I was actually kind of considered something had happened. But I let Ben and his buddy in since Ben is the world's slowest eater/gets a lot of grain, and then Ms. GY came running out. She had completely forgotten. We got the ponies and tack loaded up and then both of us looked at our temporarily abandoned phones and had a ton of missed calls from JT. A horse emergency at her barn had come up and she asked if we could reschedule or move till later that day. Since everything was already all loaded up, Ms. GY and I opted to reschedule to tomorrow and head out for a trail ride.

We went to Watermelon Pond, part of Goethe state forest. It is all of 10 minutes from the barn and usually empty. Ben was, overall, a VERY GOOD BOY! He started out prancing and jigging, but a long trot got his head mostly screwed on straight. He did start the canter with a few giant sideways leaps over who knows what and then was pretty strong the whole time cantering. Funny enough I had grabbed his dressage bridle to trail ride in, but maybe should've stuck to his stadium bit/bridle. He was GREAT at the walk for the whole second half though. No jigging, just a big relaxed swinging walk. A covey of quail flew up right under his nose at one point and he barely spooked. Horse brains man, no rhyme or reason.

It was a GORGEOUS day - 60s/70s, clear blue skies, drier than normal. Definitely one of the fall days that makes people love FL. 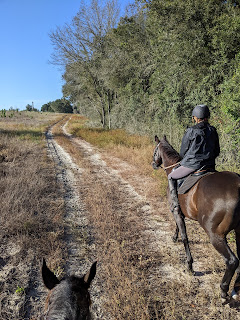