I spent the past week in Maine and was scheduled to come home today, arriving into Orlando around midnight. By Monday this was looking less and less ideal, and I got on the phone with Delta to try to move things around. It involved a loooong hold time to talk to someone and then another looooong hold time to get the change made without charges, but other than that the experience was amazing. They offered a variety of options into Gainesville, Orlando, and Jacksonville and basically just let me pick my favorite. Then because I selected Gainesville, there was going to be an add on charge, but the first rep pushed me over to a second one who went out of her way to make it happen without a fee. This is extra amazing because Gainesville is 45 minutes from my house with 0 interstate minutes whereas Orlando is 2 hours away with a long stretch north on 75 or parallel roadways that were very liable to be clogged with people heading north away from the storm. It doesn't take much on a good day to turn 75 into a parking lot between the turnpike, Ocala, and Gainesville, so add in evacuation traffic? Guaranteed to be hell.
Anyways, major major points to Delta for that. The customer service reps offered a variety of options and worked extra hard to make sure I didn't pay for the change. Then the flights themselves were on-time and pleasant as well. I'll definitely be intentionally looking for Delta flights in the future. Good move to make the change though, last night Orlando announced that they would be cancelling all flights after 10:30 this morning. At least that would have been before my departure so I could have lingered in Maine vs. getting stuck in LaGuardia, but still, not ideal. 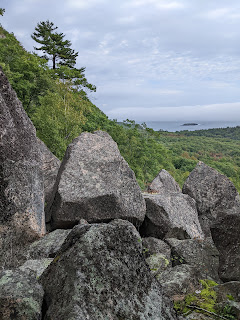 It did seem a bit silly to be rushing to fly back into the state where a hurricane was about to hit. But I did leave my husband, our newly surgerized cat (sutures came out Tuesday before I left, but she's still getting tube water and meds multiple times daily), pigs, chickens, and BEN!! in Florida. So there was impetus to get home before the storm. Ms. GY has been through quite a number of storms and had the standard grain, hay, and WATER needs taken care of. But I still wanted to give Ben an extra kiss and cuddle before the wind/rain got too bad. We did a bit more than that even and had a pleasant, if a bit spicy, ride this morning before it started spitting rain.
I attached a nifty mane tag with my name and info. Just in case fences go down. Fortunately Ben's pasture mate is also the oldest, smartest horse at the farm. This reassures me that even if fences go down, he'll probably stick around and not engage in too much drama and shenanigans and hopefully inspire Ben to do the same.
And that is that. Not a whole lot else to do - we're north of the projected path, so barring any tornadoes, it is just going to be a LOT of rain and some wind. The strengthening to a Cat 4 this morning right before it is scheduled to make landfall is not exactly ideal, I'm hoping everyone in the direct path weathers this okay.
at September 28, 2022