January- This month did not set a great tone for a new year. The first few days included euthanizing Leila and the end of my riding time with J mare .

The combination of these events led to ramping up my previously half-hearted horse search. The horse search was also off to a great start that included trying a few lame horses and then vetting one lame horse. Between my own search and my friend's search in the spring/summer of 2020, I started to wonder if I was going to need to re-evaluate my budget for this whole hunt.

February- I met Yoshi/Shidoshi at the start of February. After two trial rides, I was REALLY excited to take him home for a month trial. He went cross country schooling, jumped some gymnastics and small courses, and went to a dressage lesson before his vetting towards the end of the month.

He vetted sound with no problems, so we called him officially mine and ended the trial. About 3 days later he went lame!

March- We made a quite expensive trip to a specialist who radiographed his hocks, fetlocks and feet; ultrasounded his suspensory ligaments; and blocked his right foot. The take home message was shitty feet that needed a lot of help, possible front suspensory ligament issues (of some kind... more on that later), and hocks and fetlocks that are fine. This did help set us up with a fantastic new farrier who started to work on making him more comfortable. His first set of shoes were not at all made for riding, but made him SO much happier. To fill our time we worked on becoming an equine good citizen. Also he turned 7 ! The end of March marked 30 days of pasture rest.

April- We continued building our relationship on the ground during this month. I also received a report from the surgeon who saw him at the beginning of March. This caused a bit of a meltdown because the report varied more than a little bit from the verbal information and instructions I received. Including recommending stall rest, something that had definitely not been happening since he had told me pasture rest would be fine. With the help of my BFF in Delaware, we broke down the actual information to something usable. The last day of this month, we moved to a new barn.

May- Yoshi and I settled in at our new barn. We took a dressage lesson with my favorite dressage trainer. We also went on a 5 mile solo trail ride as well as a few trail rides from our new barn. May was mostly focused on slow miles and NOT panicking when I pulled on the left rein too much and made him rein lame. We both fell in love with the new barn though, and he really started to finally come out of his shell. 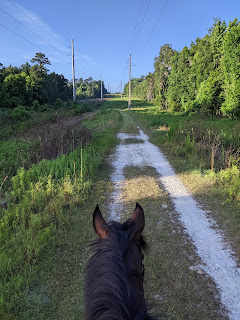 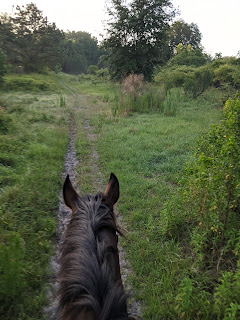 June- This month we ramped up our instruction. Whereas May was focused on getting back to work very carefully, June became about getting back to work correctly. Unfortunately/fortunately due to scheduling difficulties, we started riding with a new dressage trainer in June. The fortunately part is because I adore her (obviously); the unfortunate part is that I had known the original dressage trainer since I was 15, which made it sad to move on. We also started with a new to Yoshi jump trainer and started jumping baby courses. 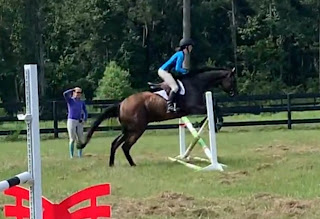 July- Yoshi hauled off property 8 times in July, including to our second cross country schooling. We started working on transitions within gaits and also got nailed on our transitions between gaits. JT and DT seemed to be on the same wavelength and the lessons complimented each other very well.

August- This month I again was incredibly grateful for having purchased insurance when I bought Yoshi. He spent the night in the hospital for IV antibiotics after being diagnosed with nasty cellulitis that THANK GOODNESS was not a septic tendon sheath. Yoshi also learned a new way to carry himself and spent a week with JT to help him understand those lessons more quickly.

September- Yoshi and I went to our first show together! He was an absolute star and would've won except for my forgetting a jump in stadium and causing a TE. He also stabled at the show for the first time, and I camped in my horse trailer for the first time. We experimented with leg wear to keep him from knocking himself in the pasture. We also had an awesome cross country schooling in which we tackled BN and a few N fences, made much easier by being able to use himself better. He gave me new confidence over down banks as we tackled the T/P bank very uneventfully.

October- We started with our second show. He actually did win our entry division this time because I remembered the courses. Our dressage was a bit worse though, prompting a couple month hiatus from showing 3 phases before we planned to move up to BN. We did go to a jumper show though, which was a fun low key way to get him out over some new stadium jumps. Yoshi also celebrated his 1 year retirement from his last race. 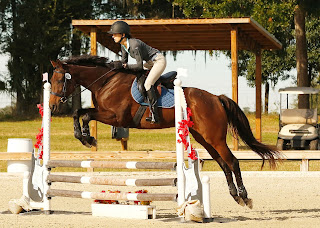 November- This month we made it back out onto the trails twice. Yoshi was a star there as usual. Yoshi also rejected his fancy PSofSweden bridle and seemed perfectly content in a plain crank noseband (not cranked tight). He went through some chiropractic work at the start of the month and then four weeks later. His recheck got a great review. He felt great overall with much less tripping after the chiro. He also moved up to 3'. 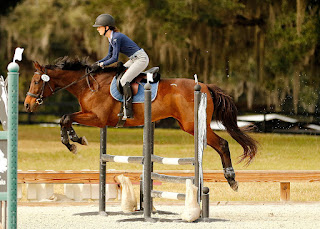 December- We started December with a mystery lameness. We're ending the month still not sound, but with a few more answers than we started with. Fortunately it doesn't look like cervical arthritis is the culprit, which has good implications for his future. Unfortunately though his future as a sound event horse is still questionable at this point. This feels unfortunately similar to how I ended 2020.
at December 31, 2021