Ben gave me a bit of a scare Saturday morning. He'd had a tiny cut on the inside of his right hind on Friday. In true horse fashion the lower half of his hind leg was hot and swollen Saturday morning. I cold hosed it during his pre-show bath and then gave him a gram of bute and wrapped it up for the trailer ride. One year ago, I scratched Yoshi out of this show because of cellulitis, I'm beginning to think it is cursed. But as one friend pointed out, this is also horses in Florida in August. Another, who has had a couple frustrating shows and plans that weren't, suggested that if no one ever planned things with horses they'd stay sound forever. Quite possibly!
In any event, Ben felt sound when I got on, so we headed over to warm up. 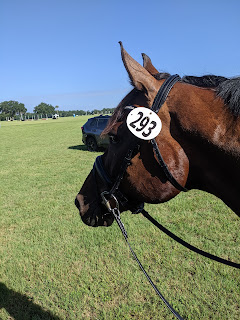 When I arrived there was only one person in front of me in spite of there being 20 minutes until my time. JT had offered to come warm us up, but my dressage was well before her other students were going so I told her we could probably figure it out. This let her stay at the farm and get a few more things done before heading over. I did struggle for a minute because I haven't used the reins I put on that bridle before, so I wasn't sure which notch to hold. I felt it out though and we had a decent warm up. I focused on trying to ask for bend through his body and neck and trying not to pull on my inside rein.
One of JT's students was dressage ring steward and came and recorded us! 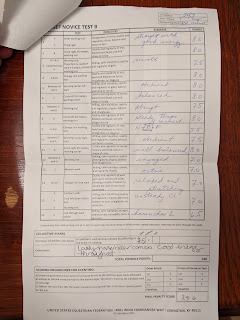 It was a solid test and the judge agreed for a 25.6. I LOLed at the short change of diagonal (HBF) where a box is drawn around B. I definitely changed on the long diagonal. But also did that in April when we rode this same test and didn't get called out on it then. Reading for detail is not my strong suit 😂
After we left the ring I felt something flapping on my left boot and realized I had ridden the whole time with the boot only zipped up to mid-calf. Oops. I changed and put my boots on in the backseat of the truck and meant to finish up zipping it once I got out. At least this was just a schooling show?
Ben kept it together to the edge of the warm up arena and then started calling for Ms. GY's horse that we had come with. He is who he is, but he's also a professional when it counts!
I hosed him off and tucked him back on the trailer with his friend and then walked the stadium course and watched a few rounds. It was a nicely forward riding course. When I tacked back up and headed to warm up it looked really crowded and there were 9 people ahead of me so we took a walk around for a bit. Then JT coached us over a few jumps. He felt great, really moving up to the right spot with no sticky chips. I could see the spot 4 strides out and ride confidently forward to it. We only did about 4 warm up jumps because he was going so well.
That feeling did fall apart a bit in the ring though. One through three were pretty great. The forward six strides from one to two rode really well. Three and four were okay, but five was a two stride combination. I mean, we did it, and the jumps stayed up, but it wasn't particularly pretty. Six contained the Majestic Oaks box filler that spooks a decent number of horses. He spooked at it, but still went, so I can't complain too much. The rest of it was a bit of a blur. I decided I should probably start riding again around seven, and he trusted that and took the bigger spot to eight where I promptly got left behind. Nine he chipped again. Still a work in progress though.
Ms. GY did her round and then we loaded up and were home by 3:30. Ben and I ended up first in our class of four! 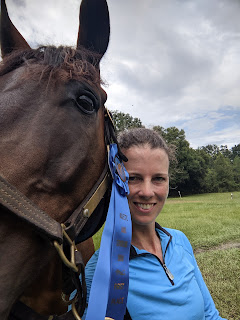 We also rescued this LARGE lady/fellow from the road on the way home...
at August 14, 2022