Ben is really becoming quite a trail pony. I unintentionally put his progress to the test on Saturday when I HAD to ride after work. HAD to because I really, really needed a meander around the neighborhood on my pony after a fairly trying day of clients and emergencies. It was a bit dark in one direction, but all the rain for the past week has missed our little corner of the world. I assumed that storm on the horizon would be the same. We set off down a new (to Ben) route that brought us into a little stand of pine trees. Ben handled a rude man in a pick up truck flagging me down to ask if it was "[my] horse that was crapping on the road" and basically yell at me even though it wasn't me (totally could have been except Ben poops pretty early on in rides, thereby avoiding the paved roads). Ben is sensitive to emotions and I was tense because the man was being pretty rude and aggressive. He also handled cows and donkeys in a pasture in stride. He started a bit when we walked past a kiddy pool in the woods, but his startles are sometimes turning into some curiosity after an initial spook and he did indeed sniff the kiddy pool closely before continuing on. When we turned around and went back by he was much less spooky. We made it back to the edge of the pine trees and then I realized we were in trouble.
We looked back down the main road and there was a line of white coming towards us. I thought perhaps we would hang out in the woods for a bit as the thunder and lightning picked up. Ben was really fairly accommodating to that request other than almost walking me into a banana spider web. But as the thunder continued he got a little antsy. I peeked out again and realized it was likely going to be raining for a while and we weren't exactly in a great spot there. We headed down the main road (the paved one that he was not crapping on) at a walk with the wind blowing rain sideways. It kept getting in his ears and he definitely looked at someone's tall hedge row and thought about tucking behind it, butt into the wood. Stupid human kept him going forward though. We hit the GY's dirt road and picked up a trot and trotted along with rapidly flowing water all the way back to the house. He stared at a river of dark colored water as it joined a lighter one, but other than that was really extraordinarily brave. Once we hit the barn he whinnied to his friends, but then enjoyed a handful of carrots in the stall. We were both completely and totally soaked, but at least the lightning hadn't gotten us.
Overall he handled the whole thing WAY better than I could have ever asked. I wouldn't have blamed him for bolting, refusing to go forward, etc etc. It was crazy out there and he listened well and was extremely brave.
I wasn't sure what that was going to do for his overall progress on trails, but we went back out today (with a blue sky) after working in the ring some and he was great. A little bit more rushed/antsy on the way home than he had been, but after a trot home in a torrential storm, I really don't blame him. 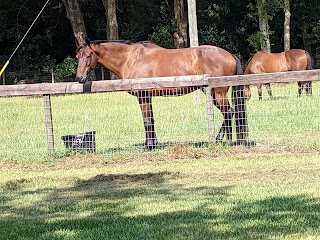 We had a kinda fun day in the ring today. I had been feeling like I'd been drilling him and wanted to do something lighter and different. I started with the resolution that I was NOT going to pull on my right rein even if we ended up outside the arena because I couldn't figure out how to turn without doing that. That part went really well, and shockingly, he turns without pulling on the right rein...
For our exercise, I set up a triangle of ground poles: and just played over them. He is really, really clever about his feet and adjusted on his own to hit the poles right in any direction I took over them. Doing circles at the tips of the large triangle was a bit of a work in progress, they had to be pretty small circles to fit them as figure 8s over one point then the next.
I wasn't sure if canter was going to work, but Ben made it feel easy. We didn't canter through, there wasn't really space for that unless I uber collected him and that would defeat the purpose of my vaguely fun, not drilling, ride. Instead we jumped each corner as a tiny wedge. He was super and stayed on exactly the line I put him on and extended or collected his own stride to make it work really nicely even when I took a line that made the corner fairly wide.
It's hard because when he is spooky I feel like I have to dictate each stride he takes, otherwise he chooses to bulge away from something and quickens the pace. But he's an event horse and needs to be able to select safe options as well since I'm definitely wrong a lot. Like I need to be able to dictate the line of travel, but he selects how to put his feet on that line? I haven't quite sorted out more thoughts on this, but I think today was definitely a good exercise in letting him work things out on his own and he showed me that he can do that really, really well.
at August 22, 2022