I volunteered Ben to be a demo horse for the acupuncture course running right now at the Chi institute. It's only about 30 minutes away from us, so that is what we spent this morning doing. He loaded easily and travelled okay. He still does much more shifting around when he's stuck in the straight load position than when he had the box stall. He looked around a bit when we arrived, but settled right down as soon as he had a cluster of adoring fans. It was a mixed animal group, so some of the students did not have much horse handling experience. There was one instructor and five students working on him.
The first half of the morning was identifying the points on the list for the students to learn today. He was a very good sport as long as someone was paying attention to him.

He actually did a lot of yawning and licking and chewing along with a couple big stretches, hind leg out behind, hind leg up under, and whole body cat stretch. It seemed like the pressure from the students' fingers on the points was doing him some good. Or he just was enjoying hanging out in the cool with his person. I didn't realized how much he has identified me as his person until I handed him off to run and use the bathroom. As I left he tried to follow and when I came back, he put his eyes on me as soon as I came out of the bathroom door. So adorable.
He was an incredibly good sport for the whole thing. He was pleasantly patient for the people trying to pick up his feet by randomly pushing on his knee and then dropping the whole foot. He let them palpate points on the medial stifles and on the ventral abdomen cranial to the sheath. He did not love when they counted ribs to find certain points, but he expressed that by moving away from their poking, not too dramatic at at all. All around very good boy.
We took a 20 minute break after point ID time and then started on an accupuncture session when we got back. First they asked some questions like:
"does he like other horses?" yes
"does he prefer the sun or shade" shade, but honestly what horse doesn't right now...?
"has he ever been aggressive towards humans or other animals?" nope, he is the very nicest person
"what are his faults?" spookiness!
Those answers combined with the fact that he came back from the break bright eyed and bushy tailed and perturbed that he was not the center of attention at that moment, got him identified as a fire type. The instructor said before the break she would have called him an earth, but after he was a bit... brighter. He wasn't being bad at all, but he was trying to stuff his whole face into each students space, one by one, and get them to give him scratches or let him obsessively lick their hands.
They also looked at his tongue and mouth. His mouth was deemed a bit dry - no surprise there and probably explained by the fact that he apparently sucks at drinking while travelling. I need to start bringing gatorade or something because even water from home didn't coax him into drinking during the break. His tongue was called pale with a bit of purple.
Then the instructor scanned him using the round end of a pen to run over specific points. It was pretty cool to watch and hear the descriptions. She was careful to specify that points can be local soreness or can indicate problems in distant places. She also showed scanning an area that didn't contain any points so that could be used as a negative control. He was pretty relaxed with the control area, she said not a typical TB. He was positive to a number of his bladder points over his lumbar area. She said it was pretty highly unlikely he had problems with all those corresponding organs, so it was more likely local soreness. He was positive to his right front foot points, makes sense given the TWO MONTH abscess saga. He was also sore all down his back on his left as opposed to just the lumbar area on the right. He was negative to both hocks and stifles which was nice to see.
Then they came up with a plan and started taking turns putting in needles. He was SUPER for it. 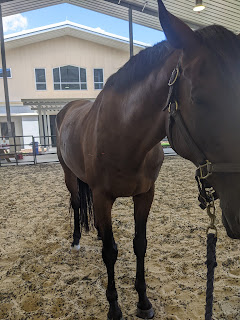 He was so good he even got hooked up to the electroacupuncture, which the instructor said she normally did not do the first time. 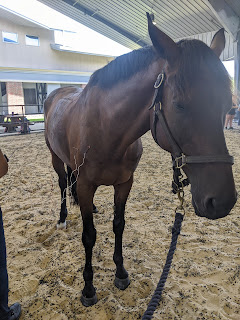 After he was unhooked, she scanned him again and he was much less reactive. I'd seen this with Zinger back in the day, but it was really cool to see Ben enjoying it and benefiting as well! Overall a fun, if a bit long, morning.
If you are local to the area, these labs are open on a first respond to email basis for horses that are well behaved. You also get a free herbal supplement (Ben's instructor selected Qi Performance for him - I need to pick it up the next time I work in Ocala). They're pretty flexible about it, a few of the horses this morning were not loving the needles themselves, but as long as they are well behaved for the touching part of things, it doesn't seem like the coordinators minded too much (with the exception of the horses they recruit for the exam portion).
at August 05, 2022