Alternate title: The one time in my life I made good fashion choices
I lucked out this weekend with the most civilized ride times of our whole barn group. Poor JT had one in prelim dressage at 8:30 AM and then one in novice rider stadium at 5 PM. Yuck. I did dressage at 11:30 and then jumped at 3. Plenty of time in between to unwind, walk stadium and cross country, and eat lunch. Sunday I went cross country at 9:30 and so got to beat the heat and be home and unpacked by 2 PM.
I braided Ben at the barn Saturday morning before we hauled over. He wasn't bad to braid at the show last time, but since I was hauling just him, it was easier to do at the barn on the cross ties. He warmed up for dressage like a total professional. He is actually easier at shows than at home. He keeps spooking to a minimum and seems to know we're there to do the thing. Plus since he's not there all the time, things can't MOVE in between him seeing them, which is truly the most upsetting thing to him.
We had practiced the test on Monday with JT - Training A. It is... interesting. For one, I am still somewhat surprised by small arenas and how freaking fast things come up. For two, canter lengthenings on a circle just seem mean. What's wrong with a long side and then returning to working canter at the corner letter when you also have the corner of the ring to help bring them back? JT told me to show a clear lengthening, you have to feel like you are going SO forward you are about to jump out of the ring. The purpose for training level does say "To confirm that the horse and rider... have an understanding of the development of thrust..." so there we go. Along with "Accuracy of movements and transitions now becomes more important." She also helped me figure out how to ride the "K-D half circle left 10 meters returning to track at E" (ice cream cones as I have called them). If you point at E, you end up not making it to E with the horse's shoulder and your body, very apparent from the judge's spot at C. So she said aim to just before E in order to make it look accurate.
At the show, he went in and did the thing like a complete professional. We shoved sugar cubes in his mouth just before hand. Other than noticing him actively chewing them as I did my free walk, it worked well. The tongue stayed put the whole test. Good boy, thank you Ben.
We scored a 29.4 with the collectives "Willing horse shows correct training. Well ridden test." Hooray! 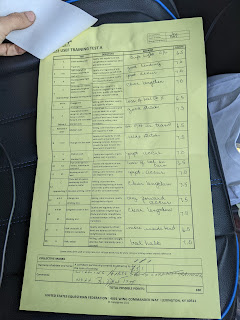 Stadium... well he was relaxed and he jumped the jumps and we only had one rail. We did in fact put three strides into a two stride again. But that wasn't even the rail he knocked... the past month has helped me realize that even when we (specifically I) screw things up, he can in fact still jump 3'3" fences from a not ideal spot. When we stopped out of our 1.0m class at Sweet Dixie in August I decided that if I got him to slightly the wrong spot, he could not possibly make it over the jump. False. Sure he jumps better from the correct spot. And unlike Zinger who would get himself to the right spot regardless of what I was doing, Ben does in fact end up at the spot that I ride him to. Blessing and a curse, Zing definitely gave me the middle finger sometimes trying to adjust striding in lines that he was sure he knew better than me in. But Ben will also end up at a super awkward spot if that is what I ride him to. Now though he will fix it for me by jumping up athletically from that spot.
Side tracking for a moment... I normally drink a second cup of coffee around lunch time. What with walking courses and braiding Ms. GY's horse for her, I forgot to. And that was the way our round felt. Thursday in our jump lesson Ben had played with some extra pizazz after the fences. And on the Sunday before he had been so freaking tight and spooky at Majestic. So I was not expecting the relaxed, soft horse I had on Saturday. I'm not complaining, it was a very pleasant round. I at no point doubted he was going over the jumps and it was really nice to not be shooting sideways spooking at things in the ring. But I definitely could've used more leg and more forward. It was different than when he's been stiff, quick and still behind the leg, it was just a lack of leg. Ms. GY summed up our three strides in the two with "He wasn't sticky, it was just... off". He got a tight spot in and I did not land and GO, so we put three strides in and then he tidily jumped out. At least that's the way it felt, I haven't gotten the video yet.
But anyways, we did it! We jumped our first recognized training level round! And only had one rail!!!!
My green coat and green bonnet combo for dressage and stadium is still getting the MOST comments I have ever gotten on a fashion choice (not a high bar to beat... I live in t-shirts and jeans or running shorts most of the time). I don't think I realized the green was going to be quite so unique, but I added a bonnet to my PSofSweden order when I got Yoshi a bridle, and the green was my favorite. So when I sweated to death last April in my regular black show coat and JT recommended the AA Motion Lite coats, I picked out a green one to go with the bonnet. And last show and this show, multiple people have told me how nice it looks. Also, those coats are pretty stellar. I have been SO much comfier in that than my old show coat. If FL ever throws a cold winter show at us, I'll probably break that back out, but until then, it is the AA motion lite FTW. If there is a slight breeze I can actually FEEL it through my coat. It is wonderful.
I have no photo to go with the last paragraph... I'm eagerly awaiting pro pics from this show, so hopefully there will be a good stadium one to snag.
at December 05, 2022