I just finished up saddle hunting. Given the number of other speed bumps Yoshi and I have encountered on our journey to greatness (ahem, w/t/c under saddle), this one was actually small. He got a massage a week ago Tuesday and I was told, under no uncertain terms, that my saddle doesn't fit. Okay, this was not a huge surprise. I bought it for Leila who was WIDE. But I thought with the thinline pad with front shims it was passable. Apparently not. It's not the end of the world, it is an old Black Country (MW, 17") that I got for $800 at a local tack shop. I do not have strong feelings about it. Zing's last 4 years of life I rode him in an M. Toulouse that my friend sold me super cheap. I HATED that saddle. But he loved it. He definitely had strong opinions about saddles, so combine him loving it with me having exactly zero extra dollars, and I made do. It's not like we were doing anything particularly challenging under saddle anyways, but boy was I glad to sell that saddle after he passed. The just replaced black country allowed me to be in the correct position, but it did not in any way aid me in being in that position. So I was not too sad to be told that it is not the right one for Yoshi.
I took the saddle down to Good Apple consignment in Ocala (not to consign, their saddles are much too nice for me to think they'd want to take this one...) as a comparison. The owner there was incredibly helpful, and I left with 3 saddles to try. She definitely pushed the wool because she was concerned, as am I, that as he muscles up his back will change substantially. Then I'll be saddle hunting again in 6-12 months. And while buying used and selling used means not as much of a loss, I feel like it is generally not a game I win. Other people who are more patient or better at selling and buying may, but those are not my strengths.
I ended up with a total of four saddles to try; three saddles from Good Apple and one from Highline Tack. 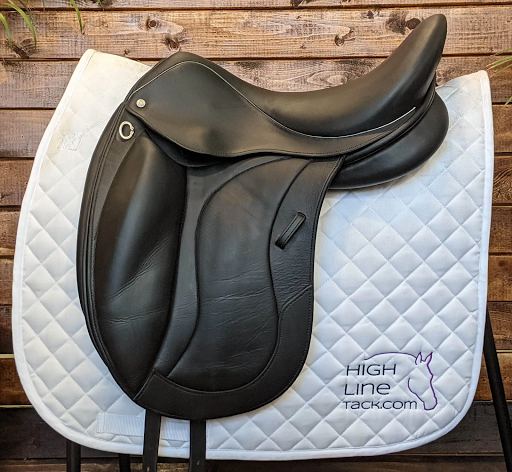 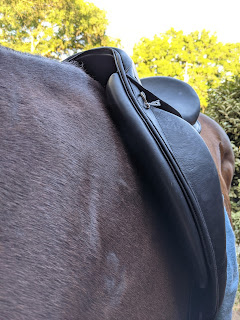 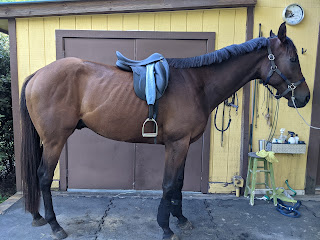 Overall the whole experience was not too painful. Good Apple was fantastic to work with and soooo helpful in picking out saddles that might work for us. She also told me to take pictures of him in the saddle as well as me in the saddle and if none of the initial three worked, she could use those pictures to help us figure out one that would. They technically have a 5 day trial period, but she said if there was one I needed more time with to just let her know and I could keep it for longer.
The fitter also checked out my jump saddle when he came back Monday morning since I didn't have it out at the barn with me the week before. Fortunately he gave it the okay with a fluffy fleece half pad. Thank goodness. Saddle hunting for two would have definitely been more than I could handle in one month!
at May 28, 2021