Yoshi got new shoes last Tuesday. Actual honest to goodness shoes. He jogged sound in his clogs before we changed the shoes and was only mildly right front lame after the change. Barely perceptible especially because he was playing on the line. Big change from the horse who was too sad to trot off until I chased him with the lead. 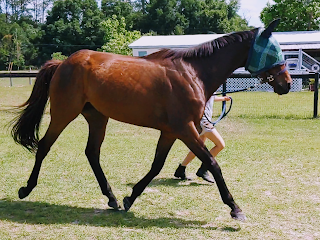 Taking off the clogs was a bit challenging, the second layer of casting material really anchored them on well! It took some plying with treats for him to stand for that. Then the farrier trimmed him up, there was actual hoof growth to trim off this time, and custom shaped a shoe for him. He got copper on the sole, he said he likes to use that as a preventative, then dental molding and a leather wedge pad, then the shoe. Nailing on was 100% at the end of his kitty minutes so he got treats for that too. 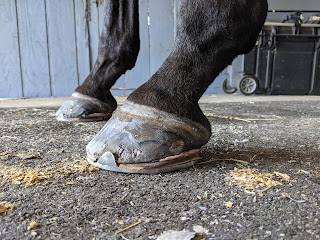 The farrier isn't sure the shoes will stay on because he's got such terrible, thin hoof wall. He said to check the clinches frequently and call him if they started to loosen. He also recommended a hoof oil, Farrier's Fix, but said he wasn't picky as long as it was good quality ingredients.
I tossed him on the lunge for a couple circles each direction this morning and he was very subtlety off on a 20m circle on the right front. Going left looked good. I'm going to check in with his farrier tomorrow, but it was much improved from right after he got done, so I don't know that it will be worth fiddling with things again.
In other news, he's ripped the top of one of his fly wraps already. Still usable because it's only one spot where he pulled the edge away from the wrap material, but I'm sure he's only going to make it worse. Not necessarily a terrible review if your horse isn't a pest who likes to undress himself, but obviously they don't stand up to his teeth. Fortunately at our new barn we have much less need for them, so he gets to have nekkid legs again. We're all happy about that!
at May 02, 2021