My content on here has most definitely been lacking lately, especially in comparison to last year. The whole of 2022 has actually felt a bit that way. A lease horse that was going to be up for sale then as soon as he became my horse, an abscess that sidelined him for two months and made me contemplate quitting horses altogether. And then figuring out the emotional side of the horse who was on stall rest for 2 weeks and is more emotional than any other horse I've had. Not that the emotional side of things is not worth writing about. To the contrary. But I am completely muddling my way through it, trying different tactics, and not really feeling like I have anything useful to add to a dialogue about spooking and overflowing emotions.
To summarize that muddling for posterity, Gastrogard was the most useful part of the whole thing. It enabled Ben to actually come back to earth between spooking at things. It did not stop spooking, but he could definitely check back in wayyyyy better rather than just escalating.
We're finally back on track for something more akin to last year's excited lesson updates. Ben spent last week in JT's hands while I was in New York with family. I got some interesting updates
"Couple things- I’ve been working on getting him moving off the leg better. Some of the spookiness comes from how much he holds his breath and clutches when leg goes on, we are sorting that out. The other thing is he’s too down into the bridle coming to the jumps and then gets onto his left shoulder. If we can fix the self carriage and straightness this is a hell of a horse"
1. Always nice to have your trainer say the horse is a hell of a nice horse.
2. I'd felt that with the leg on, but couldn't verbalize it or fix it. The spurs improved the response, but also felt a bit like I was just managing to be stronger than his breath holding and push him forward in spite of it. Not that he had actually let go and moved freely forward.
3. Getting onto his left shoulder. You'll recall I love to pull with my right hand. I'm sure that's really helping him :: sarcasm:: Or I could have actually created that problem. 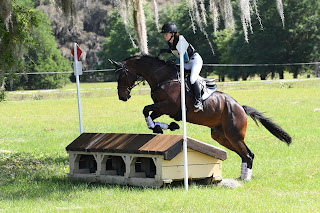 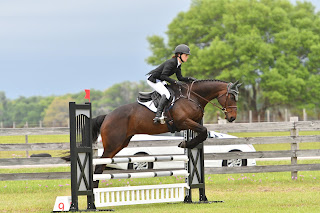 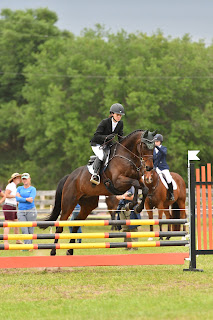 Chicken or egg with that right hand and his left shoulder. I've tried telling myself you can't pull a horse straight and was working on that coming to jumps prior to our extended break. Also sorry for the repeat pictures. We may get to another show at some point, and I'll get some fresh material.
JT continued on and said she popped him over a few jumps with just a couple jumps that were over 3' and even with the strength he is lacking it was dead easy for him. Except for the spooking and chipping to the base that made holding his shape to the base a little hard for him. She said she wanted to get him through some grids soon. I totally agree and am excited to do grids again.
So with these things in mind, I had two lessons back to back on Monday and Tuesday of this week. Monday was... a hot mess. I haven't jumped since the end of April. We started out well enough, but fell apart when we had to do an S turn of jumps. The left turn we managed, but it wasn't pretty. The right turn (shocking) fell completely apart and we stuttered to a stop in front of the fence.
The general problems broke down as follows:
Uhm. Once I typed those, there are fewer than I thought and all go back to really one problem - lack of leg! I spent my drive to work that day and my drive to the barn the next morning trying to put a default of "add leg" into my subconscious.
Tuesday was MUCH better. Monday felt like a serious LESSON in that there were so many things that we worked on improving. Tuesday felt like a lesson, with more bite sized pieces vs. unhinge your jaw and swallow the whole damn lesson in one bite. We switched Ben to a wonder bit with a figure eight bridle. After warmup we started on the same S turn of three fences. The second and third he drifted left HARD and JT asked to get on him. She got on and kept him straight. WOWWWWW he can seriously jump when he is held accountable for being straight and lined up. It massively helped my feel of pace watching her on him.
After she got off, she put an angled rail on the left side of every fence we jumped. About 5 strides out from the first one he eyed it pretty hard, but still went forward, good boy. I had a much easier time sitting down and half-halting up. The deal with trying the wonder bit was that it would give him more lift up, but I COULD NOT pull back on his face in it. I thought the "hands to the jump" every single jump and the whole thing went a million times better. We even did a two stride line fairly well. The first time through he got long to the first and I got left, but thanks to his rides with JT, he powered forwards and put two in and jumped out nicely. The second time through, in spite of making a different turn, I got the same slightly long spot. It's funny, Yoshi LOVED the slightly gappy spot, I think his secret inner dream was to be a hunter. Ben on the other hand has been a firm believer in fitting in an extra half stride there. But now he will take the longer spot and do it pretty athletically too. I was more prepared the second time through and just sat up and rode in between and he jumped out beautifully. Good boy.
Then I loaded him up and moved him up to the GY's. But that's a post for another day.
at July 27, 2022