Shidoshi had several tests to pass. First, we went cross country schooling with my friend from the barn, her semi-baby thoroughbred and our trainer. He was amazingly good. He jumped everything presented to him on the first go around. The banks were a bit of a struggle, not in terms of willingness, but in terms of figuring out what to do with not just two long front legs, but also two long hind legs. He tended to get up the bank with the fronts and then do some odd combination of bunny hopping or otherwise awkwardly flinging the hind legs up after. Having four legs to coordinate is HARD! Especially when you are doing something other than flat out galloping. He did something slightly different each time though, which I appreciate as a mark of intelligence. We walked it the first few times and then when he trotted he tripped decently. The next time he thought faster might be better but responded well to me bringing him back. It's still very much a work in progress, but there was progress. The ditch was similar although easier to figure out. He was so relaxed the first time he put a foot into it. The next time he jumped it cleanly. So cool! Not spooked at all by putting the foot in it, but still figured out that wasn't the best way to do it.
In spite of very easily going through puddles after rain, he was a bit spooked by the water. He stopped about 10 feet away and stared, I could feel his heart pounding. He almost followed the other horse in, but hesitated a bit too long. The second trip the other horse took through he did follow him in. We walked through it from every direction then incorporated it into a little series with two jumps, a trot through the water, then a trot up and down a mound. He trotted right into the water, no problem. Test one passed with flying colors!
The second test was seeing what my dressage trainer thought of him. Fortunately, he LOVED him. He was amazed at how recently he had come off the track and how quiet his mind was. In our first lesson he was already starting to come round and soften over his back. He declared that he was amazing and at his price was a steal. Hooray! I brought him back for a second lesson the next week because I was concerned I was messing him up - we had some right head tilt going on - the mare I was riding before him also had done this some - common denominator... hmm... He quickly helped correct that - a combination of pulling with my right (inside) hand and not maintaining contact with the left (outside). AND in spite of his declaration from our first lesson that we would not canter for a month, we got to move on to a few canter circles. Shidoshi was fantastic. I had started exploring/learning how to truly canter with the mare I was riding before him, really communicating with her back and as the dressage trainer describes it "Squeeze to slow, squeeze to bend" - he doesn't ask for half-halts during the canter, rather a reapplication of the aids used to ask for canter every other stride in order to engage, soften, and maintain an even rhythm. Shidoshi quietly accepted this and responded beautifully. He quickened and tried to run a bit when I pulled on the inside rein, but as soon as I fixed myself, he softened and kept a steady, even rhythm. It was an AMAZING feel!
The final, and most important, test was his PPE. It was postponed by a week because he managed to slice the front of his hind leg up in a fence, probably kicking over it at the grumpy mare in the barn. While he was fine and sound the leg was quite swollen to the point that trying to palpate tendons would not have been possible. His PPE went well, negative flexions all around, no surprises with heart, eyes, mouth etc. And so it was made official! 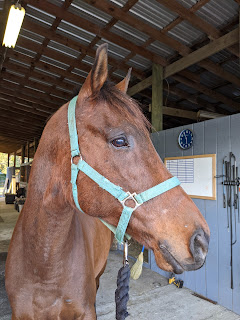 JC name: Shidoshi
Barn name: Yoshi - this happened while I was not renaming him until it was official but none of us could actually call him Shidoshi
Show name: Lyrical
Welcome home dear heart, whatever your name is!
at March 11, 2021