Not quite your dancing shoes

Yoshi got set up in some new shoes today. Although calling them shoes is a huge understatement. They are... Multi-layer engineering feats? His wedges were removed and a pathetically small amount of foot was trimmed up. Granted it had only been 4 weeks since he was last done because I wanted him out of the wedges ASAP, but still... The barn dogs were tres disappointed in the pickings.
Then the magic started making his clogs. I'm realizing now I have likely just lucked out over the past 20 years of horse ownership, but I had never seen clogs before, and I had never seen a shoe casted on. I wish I had taken pictures, but I was too busy simultaneously gawking and trying to keep Yoshi compliant. It's a fine line, he actually does best just cross tied most of the time. But at certain times he needed to be held or very carefully fed treats. When I'm right in front of him he starts to nuzzle, nudge, and occasionally use his teeth on various parts of me. Hence cross ties working better most of the time. But when the farrier was buffing the outside of the hoof or actually applying the casting material he needed single treats fed very slowly in order to stand very still and not yank his foot away. He actually got an A+ from this farrier with the comment that he had been the smoothest application of clogs ever. Yay baby horse! This is why you're worth all this expense and heartache so soon into our journey together. Not that standing can't be taught, but it really speaks to his mind and personality that he is this way just 5 months after his last race and without ever really having this skill taught.
Back to the shoes... I guess clogs are traditionally made of plywood (probably why they're called clogs), but Yoshi's were made of this neat plastic. It is used for manufacturing and shipping containers apparently. After the tiny bit of trimming, his foot was set on the plastic and traced. That tracing was then cut out with a saw and a leather wedge pad was added. This allows the angle of P3 to be corrected with as little actual pressure on his heel as possible. His sole was cleaned, treated with durasole, and then some other material was applied, I forgot to ask what that was. This whole contraption then was glued and casted on. The farrier said he had a paper thin hoof wall and that's why he was using the glue and cast. I wish I had taken a picture because the wall really was ridiculously thin. I don't know enough about feet to pick up on subtleties so I wasn't expecting much when I picked his foot up to look while the farrier cut the plastic, but even I could easily see that the wall was insanely thin. I'm honestly not sure how the shoes he had on stayed on. And I understand why the set before that had 9 nails per foot. Before putting the clog on, the farrier pressed dental molding into his frog and the clefts of his feet. This firms up to something that feels like gum that has been chewed on for a while- strong enough to provide support but soft enough to hopefully not make him more sore. In order to do the cast he had to wet the casting material and then wrap it over the clog onto the foot. This was all then wrapped in plastic wrap for a few minutes while the cast hardened.
His hind feet were just trimmed up. He has more wall and more heel on them, but the farrier still felt once he started working more he would probably need hind shoes as well. Yoshi was still mildly lame after his new shoes, but much better than he had been just 1.5 hours before in his old shoes.
He said next time we'd "try to get him in something a little more practical". So we shall see what that looks like and cross our fingers for hoof growth between now and then. I started him on biotin 3 days ago and the farrier recommended gelatin, so I ordered that. Can't hurt, might help, and given the cost of all the x-rays and these shoes, what is another $20 per month?? After 3 cycles we're going to recheck rads and see what kind of progress we're making.
I leave you with these sad foot pictures... 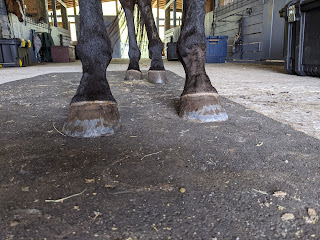 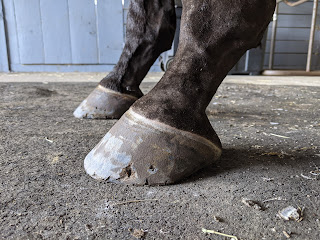