Yoshi continues trucking along with clicker training. I discovered he is much crankier about his right side. I suspect this is an OTTB thing, but it also could be just him.

Side note, I hate when people assume that every dog that is afraid of things has been abused, so I'm trying not to assume that every weird quirk in Yoshi is an OTTB thing. Seriously on the dogs, my own dog that is now my dad's dog is terrified of almost everything. Do I think she was ever hit? No. She doesn't react to a hand raised or even accidental boops with the foot that happen when living with a dog. I do think she spent her formative years in a backyard with no socialization and no exposure to normal things like cars (driving past her and riding in), music, etc. This makes her really reactive to anything new or loud.

Anyways, back to the horse. We have made progress with politely standing in a relaxed fashion, and he continues to want to come out to play each time, quickly engaging with me now instead of wandering the round pen looking for scraps or staring at other horses. I started asking him to yield both sides of his body with a nudge just behind the girth area. Left side no problem, right side ears pinned and swinging his head at me. I had to adjust to be a lot less picky about it to begin with, not waiting for inside hind crossing in front of outside, just rewarding any movement away from the pressure. Today we started to finesse the movement a bit, rewarding the actual crossing over I was initially looking for. He also primarily wants to stand on my right side (with his left side to me) when I am rewarding relaxed, attentive, head straight behavior. I flipped the treat pouch to the other side of my hip and tried using my other hand to give treats to make sure it wasn't me being uneven, but nope, he feels more comfortable and confident with me on his left. So I'm trying to pay attention to evening that out and working both sides equally. 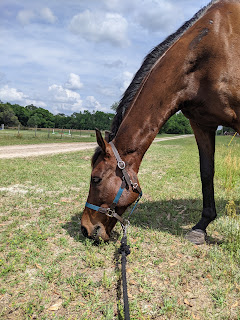 I did get some saddle time in this week. His old owner generously let me come out and ride one of the horses at her barn on Tuesday. It was a lot of fun and turned into a mini lesson after I let her slip out of the second jump in a line. Several good tidbits:

She was very big on correcting things as they happened. Not letting the mare go around too quick at the trot or on the wrong lead. Overall a pretty interesting and educational ride. I really liked the mare, she was quite willing and smooth.
I rode with her again yesterday, this time on a training level eventer whose owner might be interested in a trade for a horse like Yoshi. This was a very interesting lesson/ride to me. We started out okay at the walk and trot, but I wasn't demanding enough of him - not enough round, not enough forward. Once we addressed that, we moved on to the canter, the gait that I apparently cannot ride. This is not a this horse problem, this is a me problem. It starts with the canter transition during which I want to flop around like a fish out of water. The best advice I've gotten on this was actually very simple "Don't stop riding during the transition." For whatever reason I stop asking them to stay round, stop asking them to stay forward and just try to chase them into it. I'm not sure why. Zinger's canter transition was a very simple sit, squeeze up with the inside leg. And he did it beautifully. I'm not sure if his was so easy that when that same move doesn't instantly get a canter transition I panic and start monkeying around doing useless things?? We got a few transitions that were better after doing a lot of trot-canter-walk-trot-canter-walk/halt. I have an easier time with walk-canter because I don't start uselessly chasing the horse into the canter from the walk, but she picked up on this and made me ride them from the trot. Once in the canter the horse wanted to pop up and down instead of going forward. This made me stiffen and drive with my seat which drove his back further down, shockingly. More leg, less inside rein. When I could figure out how to use my outside rein and not pull on the inside, especially not the left, it went much better. This is so remedial as I type this out, but damn if I don't have to keep learning it over and over again.
We also worked a good bit in two point which was fun. For galloping cross country: up in two point, shorten reins, press hands into sides of neck further ahead of shoulders. To half-halt bring shoulders back slightly, leave hands where they are, support with leg. Going over fences you just shift back slightly 6-8 strides out. When you do this without changing rein length you will be shortening the reins and compressing them which you need to do to jump well. Coming up to down banks and ditches you give some rein so they can drop their head and look, but you widen your hand as well to funnel to avoid any side to side attempts to duck out. To see this all demonstrated while she was sitting on one of her sales horses was neat. It all works together so you're not constantly shortening and lengthening reins.
Next week I'm going back out to an eventing trainer I rode with most consistently about 1.5 years ago, next week. We did weekly lessons for a while until I got my mare and ended up boarding at a different barn. She always picks apart my position and bad habits, and I am excited for her to do that next week. I was hoping to get some time in on my friend's gelding this weekend while she is out of town, but unfortunately he is lame right now, probably feet as well.
at March 26, 2021