I don't know if I have clearly spelled this one out yet, but I'm worried Yoshi's feet are not going to be our main problem. He started off mildly lame on left front. He vetted positive to hoof testers across his heel of his right front. When I took him to the surgeon, we focused on the feet because holy shit he was dead lame on that right front. He went much better when it was blocked. We didn't block the left front to see if the left front lameness that emerged after the right front was blocked was foot or fetlock. There is effusion in that fetlock most days. Some days it is better, some days it is worse. It ranges from moderate to mild, but is always present. The initial radiographic changes seen on rads in November that pointed to palmar osteochondral disease were improved on the radiographs taken in early March. Which makes that disease less likely. And from everything I've read and heard about the disease now, that would be improving with all this time off - April 29th will be 60 days of pasture rest.  So why is there still effusion in the joint? The bones look fine on rads, but that doesn't rule out changes to the cartilage. Fingers crossed whatever it is responds to Adequan and pasture rest...
Back to his feet... The farrier's initial plan was to recheck radiographs after 3 cycles. In my head I had shortened it to getting to start riding again after 1 cycle since he also said we'd get him in something more practical after the first cycle. After reading this article this article on the effects of a negative palmar angle I am even more inclined to actually wait until we recheck radiographs to start any kind of under saddle work. The negative effects of the feet alone could be a threat to his long term soundness. And that ignores the fetlock still.
Many horses get a 3-6 month let down period after coming off the track. He got, at most, 1 month. So he'll get off until mid-July when we'll repeat x-rays of his feet. Depending on what his fetlock has been doing up until that point I may have them look into that further then. If it's got no effusion or mild effusion maybe I'll start him back slowly at that point if the feet look better? If it still has mild to moderate effusion then maybe PRP or steroids depending on what they recommend? There's no point in rushing things. I don't want to start him back after his feet are improved just to find him off in that left front again due to that fetlock. So time off now in order to get a longer, sounder future?
In the mean time I'm plotting finances and work to figure out if I could swing a lease on something else to ride. There's a few other things up in the air as well, but we'll see if those come to be.
No horse pictures for this ramble, so have some alligators. 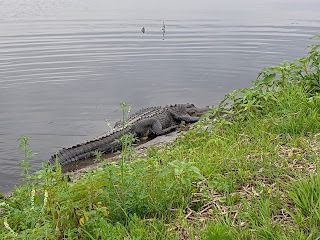 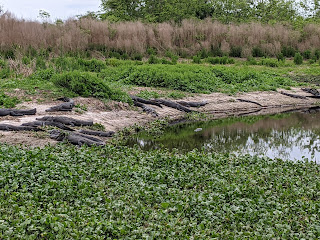