Yoshi moved to a new barn this afternoon!!! Volunteering at a horse show a few weeks ago, I met a woman who lives in the same small area I do. We were chatting about local barns, and she described her friend's beautiful property in the area. Oddly enough, I knew exactly what farm she was talking about. I guess it really isn't that surprising except for the fact that the farm is quite tucked back off the main road. I live directly on the main road which has a 55 mph speed limit and a shoulder that is only sometimes mowed. This means I run down the side dirt roads as much as possible, sometimes tracing them down to smaller and smaller tire ruts until I get too concerned I've crossed onto private property and might be shot/mauled by a loose dog, and I turn back. The farm in question is pretty far down a tiny dirt road. It has a beautiful cross country field and dressage arena visible from the dirt road. There is a farm name posted, but no owner name or phone number listed, so my internet stalking hadn't yielded much. When the woman volunteering said that was her friend's farm, I asked, in a way that was shockingly forward for my usual MO, if her friend wanted a boarder. She said she wasn't sure, but she could check. Continuing in a way that felt fairly forceful to me (but I'm a quiet introvert, so who knows) I had her give me her phone number and texted a gentle reminder that night. She quickly texted back, checked in with her friend (GY for simplicity), and told me I was in luck. GY's husband travels a lot for work and she was looking for a boarder who she could ride with while he was gone.
I chatted with her on the phone that night and it sounded like a perfect situation:
I went out to see the farm a few days later and it was as good as it sounded and as I had glimpsed from the road. I did clarify that I wasn't sure when I would be able to join for rides given the uncertainty with Yoshi right now. She was okay with that. She discussed the journey they had gone through with main eventer with clogs first and now barefoot. She was headed out to compete him at his first barefoot event (running novice, planning a move up to training soon) a few days after we met.
When it came to leaving my current barn I tried to do so as gently as possible. The care is good, and I have never had any concerns about whether Yoshi is getting fed or monitored appropriately. However, there are certain aspects that could be a better fit for me personally. But I wouldn't hesitate to come back here again and never want to shut a door or offend anyone (barring things like the barn many moons ago where my horse didn't get fed and gates got left open all the time... Was fine slamming that one!), so I wanted to do this "break up" as smoothly as I could. Fortunately the conversation went very smoothly and amiably.
In addition to a few personal fit factors, this barn is also SO CLOSE! The old barn was 8 miles/12 minutes from me, so a good chunk further. I realize that is still extremely close, and when I lived in Atlanta and Sarasota I commuted so much further. However, I live in a rural area with large properties all around so I figured there had to be someone closer who wanted to board one horse for one reason or another, I just had to find them. And dammit if I'm suffering through satellite internet I ought to at least be able to be really close to my horse! I was getting so desperate, I was mentally crafting the least creepy letter possible in my head during my runs... "Dear property owner, I live down the street and stare at your horses and luscious fields and omg please board my horse?!?!" So it's probably fortunate I came across GY's friend when I did.
He settled right in when we arrived this afternoon. About two steps of the trailer he plunged his head down to eat grass and didn't really come up for air for a while. He's going to spend the first few days in a smaller pasture where he can talk to the other horses over the fence. He immediately made friends with his stall neighbor, another OTTB, and they started a good game of bitey face. We took a walk around the large, main field, and he only got really tall once. I don't think he yet knows that the top fence in the pasture, closest to the barn, is electric, but he's a sensible fellow so I doubt he'll be too upset by it. I'm so excited he's now so close and on such beautiful property with such customized care. 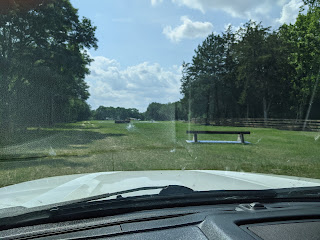